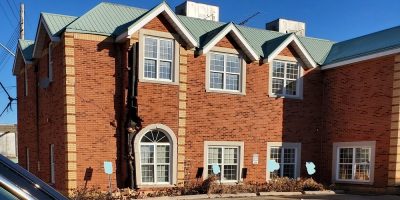 Investigators are trying to figure out how a recycling truck ended up striking a Midland business first thing Friday morning.

Southern Georgian Bay OPP says they were called to a commercial building at the corner of Hugel Avenue and Borsa Lane just before 8 a.m. with reports a large truck had struck a building.

Police and Town of Midland Fire Service arrived on scene to find a recycling truck resting against the front exterior of the business. It appears the vehicle reversed while unattended as the truck was being used to collect recyclables. Investigators are looking into how that happened.

First responders were joined by building inspectors and bylaw officers from the Town of Midland to set up a safety perimeter around the building, which sustained significant damage in the crash. Area roadways were expected to remain closed for some time as part of the investigation.