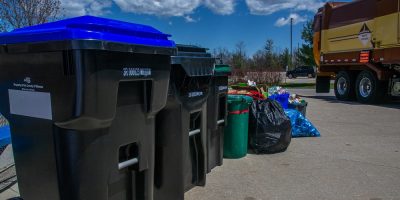 Bigger may not be the better option for some Simcoe County residents.

County councillors acknowledged that during a special council meeting on Tuesday and voted 18-12 to allow residents to swamp the size of their garbage carts.

There were over five hours of discussion about the bins, which have proved controversial as part of the County’s automated waste collection system which begins Nov. 1. Complaints, in particular, have focused on the 360-litre bins for recycling that they are too large, there is no place to store them, and for seniors and people with mobility issues, getting the carts to the curbside could prove to be a challenge.

Residents will be able to access an online tool from the cart maker to request an exchange.

“Where residents can be directed to the website and online request a different size of bin, taking them away for the initial influx from Service Simcoe, knowing there will be some residents that are unable to or unwilling to do that online,” said Rob McCullough, the County’s Director of Solid Waste Management.

Council had other options provided to them by staff including not to exchange carts or to allow additional time to provide a clearer picture of the needs and impacts with an update by summer.

Midland Deputy Mayor Mike Ross felt there was no reason to make a change without at least putting the bins to the test.

“We’re discussing a problem that hasn’t even started or existed yet,” Ross said. “Can they get it to the curb? I don’t know. Well, let’s find out. Let’s give it a chance. In my eyes, this is ridiculous.”

“I take responsibility, I voted in favour of something that’s not working for everyone.”

Bradford West Gwillimbury Deputy Mayor James Leduc felt staff made its bin decision without considering the differences in the county.

The bins delivered to residents are a 360-litre recycling cart, a 240-litre sized garbage cart, and a 120-litre sized bin for organics.

The County is not anticipating an overwhelming desire among residents to swap their bins. Staff estimate about 5 to 12 per cent of residents will seek an exchange at a cost of between $2 – $3.9 million in year-one, and $1 million annually after that.

Residents who want to downsize their 360-litre recycling cart can do it in exchange for a 240-litre or a 120-litre bin.

Council also made a modification so the 240-litre garbage cart can be swapped for a 120-litre cart, and all additional garbage must have a garbage tag affixed in order to be eligible for collection.

The decision means hiring more staff and paying for extra resources until the exchanges have been completed.

Simcoe County Warden George Cornell pointed out at the beginning of the meeting that the cart manufacturer estimated 60 to 70 per cent of the municipalities in Canada and the United States already use a cart system.

However, at Tuesday’s meeting, most councillors who spoke made it clear the cart system wasn’t the issue, it was the size of the bins provided to residents.