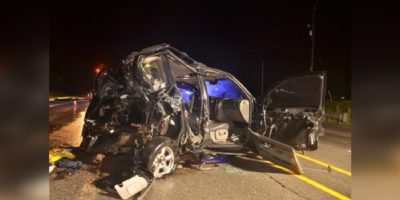 Ontario’s police watchdog has cleared the South Simcoe Police of wrongdoing after four people suffered injury during a police chase.

A police pursuit began around the dinner hour on July 24th of last year, after officers spied a vehicle believed to contain suspects wanted in connection to a theft earlier that day, at the Cookstown Outlet Mall. Police began chasing the suspect SUV on the 10th Sideroad of Innisfil, while the pursuit came to an end on Highway 88 near Bradford after the vehicle crashed into another.

Based on video surveillance taken from area businesses, and dash cam footage from the involved police cruisers, the Special Investigations Unit says that, while the officer involved did exceed the speed limit and ran a few red lights during the chase, the crash itself was not the fault of the South Simcoe Police.

“Though the officer exceeded the speed limit at points, travelling as fast as 110 km/h south on 10 Sideroad and 119 km/h west on Highway 88, he was engaged in the execution of his duties and therefore exempt from the speed limits (60 km/h and 80 km/h, respectively)” said SIU Interim Director Joseph Martino in his report.