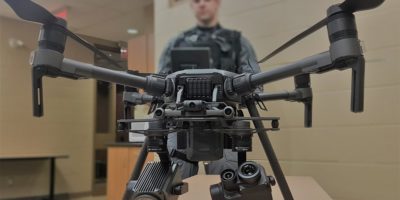 The Service has unveiled a new high-tech crimefighting tool, a new DJI Matrice 210 V2 Drone. The device is a ready-to-fly aerial system that includes remote control with flight and camera controls, along with thermal night-vision capabilities.

South Simcoe Police say the new drone will not only be able to conduct ground searches for missing people, but it could also be used to photograph and map collision scenes, participate in marine-based emergencies, and monitor fire scenes and hazmat events.

The drone can fly for about 30 minutes at a time, at a top altitude of 120 metres. Two officers have thus far completed pilot training for the drone, which should be deployed in mid-March.