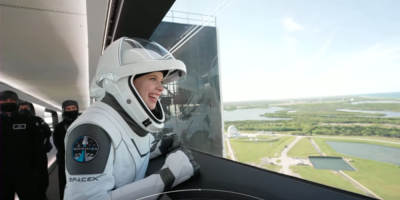 Strapped in along with billionaire Jared Isaacman, who chartered the mission, were Chris Sembroski, an “everyday” aerospace engineer; Sian Proctor, an artist-educator who will become only the fourth Black woman to fly in space; and Hayley Arceneaux, a St. Jude cancer survivor who now works at the hospital.

And punch it they did. The Falcon 9’s first stage engines ignited on time at 8:02 p.m. EDT, lighting up the early evening sky as the booster thundered away from pad 39A at the Kennedy Space Center atop 1.7 million pounds of thrust.

The sky-lighting ascent went smoothly with the first stage, making its third flight, powering the rocket out of the dense lower atmosphere. The booster’s nine engines shut down two-and-a-half minutes after liftoff, the stage fell away and the flight continued on the power of the upper stage’s single vacuum-rated engine.

The first stage, meanwhile, flipped around and flew itself back to a pinpoint landing on an offshore drone ship, chalking up SpaceX’s 92nd successful booster recovery, its 69th at sea.

By that point, nine-and-a-half minutes after launch, the second stage, and the Crew Dragon capsule were safely in the planned preliminary orbit. Two rocket firings were required to circularize the orbit at an altitude of 357 miles (574.54 km), 100 miles (160.93 km) above the International Space Station.

That’s higher than anyone has flown since the last shuttle mission to the Hubble Space Telescope in 2009.

From that lofty perch, Isaacman and his Inspiration4 crewmates will enjoy unrivaled 360-degree views of Earth and deep space through a clear, custom-built dome, or cupola, in the nose of the capsule that has replaced the docking mechanism used for NASA flights to the space station.

“We gave you a great ride to orbit,” Bill Gerstenmaier, NASA’s former chief of space operations and now a senior SpaceX manager, radioed the crew after spacecraft separation. “Enjoy your time on orbit, and we look forward to you flying again with SpaceX.”

Isaacman said the flight carried the crew “right to the doorstep of an exciting and unexplored frontier where few have come before and many are about to follow. The door’s opening now. And it’s pretty incredible.”

Asked before launch if anyone in the crew had any trepidation about riding a rocket to space, Isaacman said SpaceX founder Elon Musk gave the crew “his assurances that the entire leadership team is solely focused on this mission and is very confident. And that obviously inspires a lot of confidence for us as well. But no jitters, excited to get going.”

Added Arceneaux: “Any jitters are the good kind.”

Shortly after Wednesday’s launch, former first lady Michelle Obama tweeted her congratulations to those onboard, writing, “I’m thinking of all the young people who’ll be looking up to this crew and dreaming big thanks to them.”

While billionaires Richard Branson and Jeff Bezos made headlines earlier this summer when they spent a few minutes in weightlessness during up-and-down sub-orbital flights, the Inspiration4 crew will spend three days orbiting the Earth before returning to splashdown in the Atlantic Ocean Saturday night.

Isaacman said the flight marked an “inspiring” first step toward opening up the high frontier to civilian use.

“We set out from the start to deliver a very inspiring message, certainly what can be done up in space and the possibilities there, but also what we can accomplish here on Earth,” he said.

That included “the largest fundraising effort in the history of St. Jude Children’s Research Hospital, acknowledging the real responsibilities we have here on Earth in order to earn the right to make progress up in space,” he said. “And I feel like we’re well on our way to achieving that objective.”

The crew plans an in-flight event with patients at St. Jude and will carry out a battery of medical tests and experiments throughout the mission, including use of an ultrasound device to help measure headward fluid shifts caused by the onset of weightlessness.

Fluid shifts, interactions with the neuro-vestibular, or balance, system, and other reactions trigger space motion sickness in about half the astronauts who fly in space, an uncomfortable malady that typically fades away after two to three days as the body adapts to the new environment.

“Space sickness is one of the interesting things that this mission is going to explore, just like all the NASA missions that have gone before,” said Todd Ericson, a former Air Force test pilot who is helping manage the Inspiration4 mission for Isaacman.

“Each person reacts differently,” he said. “Fighter pilots get as sick as non-fighter pilots and vice versa. The medical team at SpaceX has a lot of experience in this area … they’ve got a regimen in place to minimize that and then treat it if it actually gets severe.” 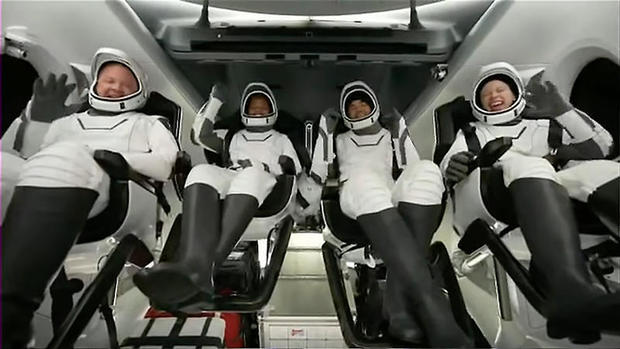