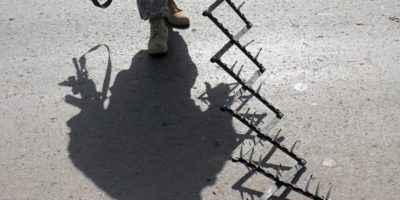 An alleged fraudster is facing a few charges, including running from the law.

South Simcoe Police got the call of a fraud in progress at a cash advance store on Bridge St. in Bradford around 1:00 Monday afternoon. Officers arrived just as the suspect vehicle was taking off, allegedly at a high rate of speed, narrowly missing a cruiser.

Officers followed for a short time, but backed off over safety concerns. Calls from motorists about an erratic driver helped officers catch up to the suspect vehicle as it headed towards Innisfil. A spike belt was used to halt the pursuit on Yonge St., and while the suspect is said to have fled on foot, he surrendered to police not far off.

A 25-year-old Innisfil man is facing 15 criminal charges including Possession of Stolen Goods, after police say the getway car was previously reported stolen.