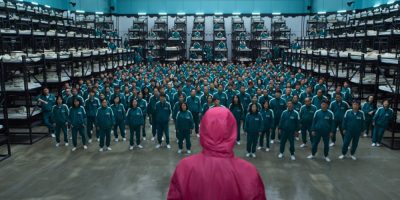 Netflix has another surprise smash hit on its hands and has announced that Squid Game has been its most popular debut for a TV show in the streaming service’s history.

Since its debut on September 17, Squid Game has sat comfortably in the number 1 spot on Netflix for weeks. Now, Netflix has stated that over 111 million people had sampled the show in only 15 days. The term “sampled” is used here because while this number is still very impressive, it comes with a bit of a caveat: Netflix bases its metric on anyone who has watched at least 2 minutes of the show. Being a foreign show, it’s safe to assume many people began the show and switched it off shortly after realizing it had subtitles.

Netflix’s last show to reach huge numbers was Bridgerton, which reached 82 million samples in 28 days. Squid Game is eclipsing that record. These numbers aren’t as high as something like Loki over on Disney Plus, but they are still fantastic numbers for a non-established, brand-new show.

So, What is Squid Game about?

Squid Game is about hundreds of cash-strapped players accept a strange invitation to compete in children’s games. Inside, a tempting prize awaits with deadly high stakes. A survival game that has a whopping 45.6 billion-won prize on the line. It’s a dark, beautifully shot show and if you don’t mind subtitles, you should really check it out.

Related Entertainment News: Will Poulter to play the big bad in Guardians of the Galaxy 3

If you had asked us if we thought the biggest show on Netflix in 2021 would be a Korean-made, subtitled and extremely violent series about a weird game show, we would have called you crazy, but, here we are.

The 2021 curveballs just keep on coming.