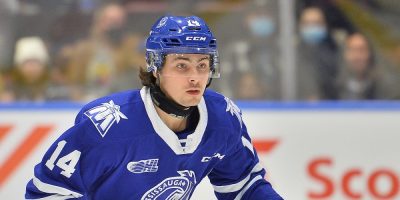 There’s no place like home for James Hardie and as a result, the Mississauga Steelheads are heading home on even ground in their first-round OHL playoff series against the Barrie Colts.

The former Barrie minor midget and Innisfil native scored his second goal of the game at 9:10 of the second overtime with the Steelheads on the power play in a crucial 3-2 win, Wednesday night, at Sadlon Arena.

The winner tied the best-of-seven series at 2-2 with Game 5 set for Saturday night back at the Paramount Fine Foods Centre in Mississauga.

The closely-contested battle took a huge turn on a controversial tripping call to Even Vierling that left the Colts bench fuming.

Seconds later, on the ensuing power play, Owen Beck skated over the right side of the Barrie blue line and slid it to Hardie, who ripped a shot over the left shoulder of Barrie goalie Matteo Lalama for the winner.

“We made a mistake on the penalty kill and let their best shooter get a clean shot,” Colts head coach Marty Williamson said of the overtime hero, who led Mississauga in scoring with 41 goals and 77 points this season. “It’s a tough one, that’s for sure.”

Hardie now has four of Mississauga’s seven goals in the series and with the Steelheads on the brink of falling within one game of elimination, he continues to keep coming up big for his team.

“He sure is,” said Williamson. “If you give him open ice, he’s a dangerous guy. He’s got a pro shot and had two goals (Monday night). We need to keep him under wraps and not let him beat us.”

The penalty to Vierling was a bitter pill for the Colts, especially after Mississauga’s Ethan Del Mastro hauled down Tyson Foerster inside the Steelheads blueline a little more than 12 minutes into the first overtime and there was no call.

“Obviously we didn’t agree with the (Vierling) call and we just have to reset,” said Colts centre Jacob Frasca, whose power-play marker tied the game midway through the first after Hardie opened the scoring just 29 seconds into the game. “We play Saturday and our main focus is the whole series and we can’t let this one get into our head too much.

“We’ve dealt with it. We’ll watch video tomorrow or the next day and be ready for Saturday.”

The Colts certainly had their chances to win it in overtime. With just over five minutes remaining in the first extra period, Christopher Grisolia had the puck in front with Roman Basran down and out and a wide-open net, but couldn’t bury it.

Then just a minute into the second overtime, Ethan Cardwell’s shot got underneath Basran but slid through the crease just past the far post.

“It’s a game of inches and it just didn’t go quite our way,” said Williamson. “We had our chances. It was hard-fought, there were two tired hockey teams out there.”

This was the third time in four games this series has gone to overtime. Both teams have now played four overtime periods.

Both of Mississauga’s wins have come in overtime.

With the game tied at 1-1 late in the first, Ole Bjorgvik-Holm scored from the point to put the Steelheads back on top.

It wouldn’t take the Colts long to get that one back. Just 2:53 into the second, with Barrie on the power play, Foerster took a feed from Vierling and then walked into the slot and wired a drive past Basran.

Both of Barrie’s goals on this night came with the man advantage.

“We scored two power-play goals and didn’t get a five-on-five goal.” said Williamson. “We got to get better on five-on-five hockey and we’ll get a day off and work on it, and go back at them on Saturday.”

The series has turned into a best-of-three with the Steelheads earning back home-ice advantage.

The Colts split four games in Mississauga during the season and then split a pair of overtime games there to open this series.

“We’re used to the Mississauga rink,” said Frasca, who played his AAA minor midget hockey with the Mississauga Senators. “It’s the closest OHL rink for us and for me personally. I played there my whole life. It’s a familiar place for me and for a lot of the guys too. It’s their hometown, too.

No one is surprised the Steelheads (fourth seed) and Colts (fifth seed) are exactly here and the Eastern Conference playoff series has been as close as it has been.

There hasn’t been a lot to decide between the two teams.

“Not at all,” said Williamson.

ICE CHIPS: While the Colts got Beau Jelsma back after missing a pair of games, veteran Declan McDonnell was a scratch. One of Barrie’s best players in the series, the Tampa Bay Lightning prospect is day-to-day, said Williamson. . . The Steelheads outshot the Colts 36-33. They have held the edge in shots in every game in the series. . . Barrie finished 2-for-4 with the man advantage, while Mississauga 1-for-3. . . Oliver Smith returned to the lineup in place of Roenick Jodoin. . .Game six of the series is back in Barrie on Monday night at 7:30 p.m.