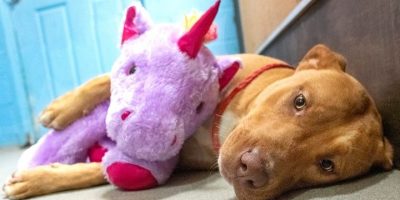 Determination paid off for a one-year-old Lab pup who made a habit of trying to steal a purple unicorn from a North Carolina business.

Dollar General contacted animal control on Sisu because the pooch had come into the store and made five attempts to steal the same unicorn.

The animal control officer from Duplin County who came to get the four-legged thief decided to buy the toy for Sisu instead.

The dog quickly became an internet sensation when animal control posted pictures this week of Sisu cuddled beside his best friend.

“This is what happens when you break into the Dollar General consistently to steal the purple unicorn that you laid claim to but then get animal control called to lock you up for your B & E and larceny but the officer purchases your item for you and brings it in with you,” the Facebook post says.

On Friday, the shelter announced Sisu and his unicorn had been adopted.