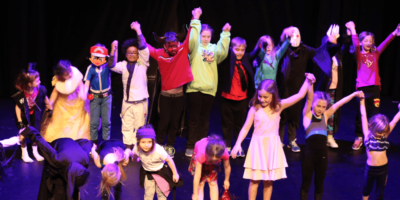 The kids at Talk is Free Theatre’s March Break camp have been honing their skills all week in preparation for their final performance, and Friday was the day all their hard work paid off.

Campers took to the stage for their end of week performances. Each age group performed original productions that the campers wrote themselves.

Kristen Keller was the instructor for the 6-9 year old age group, and she was blown away by the talent and creativity the young performers brought to camp. “This camp was amazing not just for introducing them to the arts, but seeing them flourish in the arts“

9-year old Cassidy Meeuwse had one of the lead roles in the play. It was her first time at theatre camp, or acting of any kind, and she relished the opportunity to not only create their own play but perform it in front of family and friends. “I was excited,” said Cassidy, “but I knew that I needed to know my lines and really focus“.

The best part of camp was everything!

Talk Is Free Theatre also holds theatre camp for kids in the summer. You can find out more about them and their many programs here.