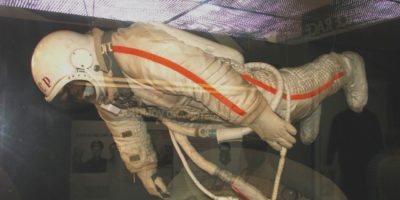 Alexei Leonov, a Soviet-era cosmonaut who was the first human to conduct a spacewalk in 1965, died Friday in Moscow aged 85, his assistant said. “He died today in Moscow at the Burdenko hospital after a long illness,” Natalia Filimonova told AFP.

Earlier this year, two Russian cosmonauts honored Leonov on his 85th birthday. They wore placards on their spacesuit backpacks, one saying “Leonov No. 1” and the other “Happy Birthday, Alexey Arkhipovich.”

Leonov chalked up one of Russia’s major space triumphs on March 18, 1965, when he ventured outside his Voskhod 2 spacecraft to carry out history’s first spacewalk.

Connected to the Voskhod by an 18-foot-long tether, Leonov spent 12 minutes floating outside before struggling to get back inside his spacecraft. In the vacuum of space, his suit had ballooned to the point that it would not fit through the hatch. After opening a valve to bleed off pressure, Leonov finally managed to squeeze back inside.

Now an iconic figure in the international space community, Leonov flew in space a second time in 1975 as Russian spacecraft commander of the Apollo-Soyuz Test Project, the historic orbital linkup of a NASA Apollo capsule and a Russian Soyuz in a mission that symbolized the era of detente.