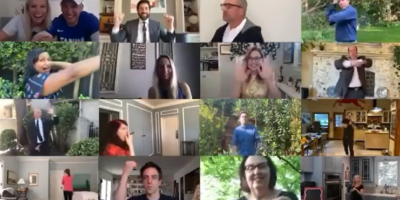 John Krasisnki has been spreading cheer during the coronavirus pandemic with his new digital show “Some Good News” (SGN). The actor has had many famous friends appear on the show, but on Sunday he enlisted an entire cast of characters. Krasinski had his former castmates from “The Office” join him in surprising a newly-engaged couple.

First, Krasinski, who played Jim Halbert on “The Office,” highlighted some viral proposals and weddings that have taken place during quarantine, one of which emulated his character’s engagement on the show.

On “The Office,” Jim proposes to Pam, played by Jenna Fischer, at a gas station. A Maryland man named John recently proposed to his girlfriend, Susan, the same way and sent video of the engagement to Krasinski. The actor had the couple on “SGN” Sunday via video conference.

“Congratulations guys, you now have proved that proposal works 100 percent of the time now,” Krasinski joked.

John explained that “The Office” has connected the couple and that this proposal “felt right.” Susan said John, just like Jim, told her, “I can’t wait any longer.”

The two “Office” superfans not only got to dish to Krasinski about their inspired love story, they also asked him if he’d attend their wedding.

“The truth is I am able to attend — but only if we do it right now,” Krasisnki teased. “You think I’m kidding, but I just got ordained as a minister for you guys.” Krasinski figured the couple probably wanted their parents to be there — so he had their moms and dads join the video conference.

“Are we ready to get this party started? No, we are not. We need a bridesmaid, groomsmen, it’s just standard,” Krasinski said, introducing the couple’s friends to the video chat. He revealed the groom’s best man was also there.

As for Susan’s maid of honor, Krasinski had a surprise: He invited Jenna Fischer to join the video conference too. Now that the people who played Jim and Pam and the couple who mimicked their proposal were all in attendance, Krasinski just had to figure out the wedding music.

He invited country star Zac Brown to play “The Man Who Loves You The Most” as Susan walked down the proverbial aisle. When the performance finished, Krasinski had John and Susan recite their vows and officially pronounced them husband and wife.

“One day your kids are going to assume that their parents are soul mates — and in your case, they will be right,” Fischer told the newlyweds.

Krasinski still had some “Office”-themed surprises for Susan and John. First, he cut off his tie with a pair of scissors, a la Jim Halpert. Then, he told the couple since they ripped off Jim and Pam’s engagement, they should rip off their wedding celebration. The entire cast of “The Office” appeared from their own self-isolations, dancing to “Forever” by Chris Brown — just like they did during Jim and Pam’s nuptials.

Love is in the air. 💕 Catch Episode 7 of #SGN is now on YouTube and you might even recognize a few familiar faces. #SomeGoodNews