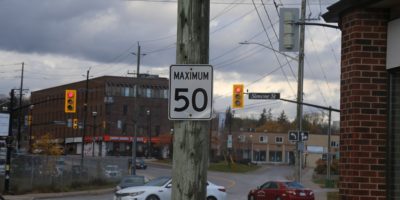 We put it to you, Barrie, and the answer is pretty clear “no” to lowering the speed limit.

Earlier this month, we posted the question through our website and Facebook page: Should the City investigate lowering the base speed limit for safety’s sake, from 50km an hour to 40? An unofficial survey on Barrie 360 found that while 153 people voted yes, an overwhelming 676 said no.

The question first came from Ward 10 Councillor Mike McCann, who heard during his reelection campaign that speeding and safety was the number one issue among his residents. “My first reaction? I was surprised” says McCann, “I thought there would be more people who would want to lower the speed limit to 40km.”

Despite this, McCann says he is pleased with the survey itself, as it helped save money. “…We didn’t spend any taxpayer dollars to investigate. Because this was an investigation if we should lower the speed limit, and if it would have any validity; would it help with the traffic calming.”

[perfectpullquote align=”full” bordertop=”false” cite=”” link=”” color=”” class=”” size=””]”…enforcement is a solution… but it goes back to ‘do you want to spend more money on your taxes?'”[/perfectpullquote]

The survey wasn’t just a yes/no experiment; folks were encouraged to weigh in on social media about the issue. Many suggested more police enforcement would remedy the issue, while McCann says that was considered “Well, enforcement is a solution, for sure it is. But then it goes back to ‘do you want to spend more money on your taxes?’ Four years ago, 90% of the people at the door were complaining about their property taxes…and the number one issue at the door when I was campaigning [this year] was safety, was speed of cars on the streets. And so this was something I just wanted to investigate.”

McCann took to Facebook with Mayor Jeff Lehman to recognize those who participated in the Barrie 360 survey.