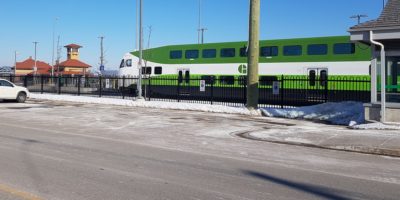 Local representatives are reminding you of the province’s vow to let the tykes ride for free.

Barrie-area MPPs Andrea Khanjin and Doug Downey were at the Allandale Waterfront GO Station Saturday to remind folks that children 12 and under can ride GO Transit for free. Not just during March Break, as has been the case in the past, but year-round. This echoes an announcement made province-wide last week.

Khanjin says that means more cash in your pocket. “The cost of transit, it adds up, right? If you have more than one child, that’s five, six, seven dollars, and that is money that could go towards groceries or school activities.”

She adds this could mean for an increase in ridership, not only out of Barrie, but into. After all, says Khanjin, there’s lots of reason to come. “We have so much going on. It’s actually really exciting how much our community has grown. We have so many cultural festivals. We have so many arts festivals. And Kempenfelt Bay. We’ve got the Maclaren Arts Centre, we’ve got an expanding downtown Barrie. We have expanding park space and beaches.” says Khanjin, “so it’s nice to be able to have those people come here, and invest some of their hard earned dollars on our tourism.”

The waiving of fares for kids 12 and under begins this weekend, just in time for March Break.