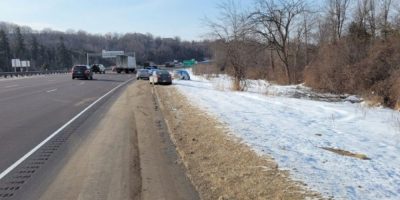 Southern Georgian Bay OPP used a tire deflation device to stop a commercial van that fled from police after it was spotted speeding on Heritage Drive in Midland around 8:30 Wednesday morning.

The van fled into heavy traffic and was later seen driving in an erratic fashion by officers in Penetanguishene.

Police kept an eye on the vehicle as it headed toward Springwater Township.

As they followed the van, OPP learned the vehicle was stolen.

In the interest of public safety, police deployed a tire deflation device just north of Barrie in the southbound lanes of Highway 400. The driver lost control and the vehicle entered the ditch near the Willow Creek bridge. The driver fled on foot and was arrested nearby.

A 22-year-old Barrie man is facing a dozen criminal charges, including three counts of dangerous operation of a vehicle, two of flight from police, four counts of failure to comply with a release order, and property crimes offences. He was also charged under the Highway Traffic Act for driving a vehicle without a licence.

The accused has been held for a bail hearing and will appear in court at a later date.