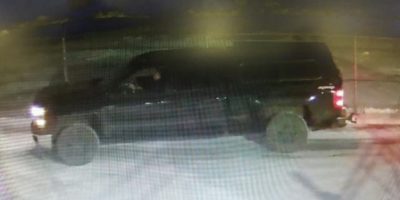 A brand new truck was left on blocks, after someone came along and swiped all four tires.

The theft happend at a Barrie View Drive car dealershop back in early December; the brand new Chevy Silverado was in a secured lot at the time of the theft.

Investigators say two men were spied on video surveillance entering that fenced-in area around 10:30 on the night of December 7th. All four tires and rims were removed, with a value in excess of $6,200.

Police describe the two suspects as:

A suspect vehicle (pictured above) is described as a 2014-2018 Black Chevrolet Pickup truck, with a black cap, pintle hitch, black aftermarket wheels & rims, and no front licence plate.

Anyone with information on this theft is asked to contact Constable McGill of the Barrie Police Service at 705-725-7025, ext. 2527 or by email at smcgill@barriepolice.ca. You can also contact Crime Stoppers at 1-800-222-TIPS (8477)  or leave an anonymous tip online at www.p3tips.com.