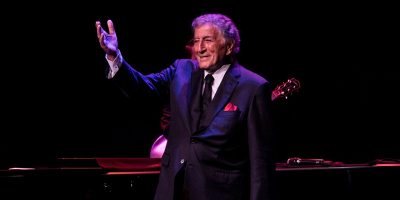 via CBS This Morning

The family of 18-time Grammy winner Tony Bennett is opening up about a secret they’ve kept for more than four years. In an article Monday morning in AARP The Magazine, they reveal Bennett is battling Alzheimer’s disease, which robs people of their memories and cognitive functions.

“CBS This Morning” co-host Gayle King spoke with Bennett’s wife, Susan Benedetto, to see how the 94-year-old singer is doing and why she decided to share his diagnosis now.

Susan Benedetto: He always likes to say he’s in the business of making people feel good. And so, he never wanted the audience to know if he had a problem. But, obviously, you know, as long, you know, as things have progressed, it becomes more and more obvious when you interact with Tony that there’s something up. And so, it just seemed like now was the right time.

Gayle King: Is he in pain?

Benedetto: No, he’s not in any pain. And that’s why he doesn’t think anything’s wrong with him. He’s like, “Susan, nothing hurts. I feel great.” You know, he works out five times a week. He sings twice a week with a pianist that comes over. He only understands if something is an ouch, you know, then there’s a problem. If you ask him how he feels, he’s, “I feel great.” Is anything wrong, Tone? “Nope, nothing’s wrong,” you know?

Bennett has been singing for more than 70 years. But not long ago, he began to worry.

Benedetto: We came home one night after a show. And he said to me, “Susan, you know, I can’t remember the musicians’ names.” And I just chalked it up to him being, you know, at the time, you know, late 80s. We forget things. And he said, “No, no.” He said, “This isn’t right.”

Something wasn’t right. Soon after that show, Bennett received his diagnosis. That was in 2016.

Benedetto: Thank goodness he does. He knows all his kids, absolutely. And he knows me. When you’re somebody’s caregiver 24/7, it goes a long way if they still know you. You know, every night when we go to bed, he says, “I love you, Susan.” And every morning when he wakes up, he says, “I love you.”

Despite the disease, Bennett continued to perform, and he recorded an upcoming album with pop megastar Lady Gaga — their second together.

King: Was she aware?

Benedetto: But you know, Gaga’s wonderful.

King: Does he remember and know who Gaga is still?

Benedetto: Most definitely. Gaga is hard to forget.

King: What is the prognosis, Susan?

Benedetto: Ah… he — obviously, with COVID, things have gotten a little worse. But there’s — I mean, again, who knows? But according to his doctor, there’s no reason to think that he will drastically decline.

Bennett’s greatest therapy is singing. It’s when he’s most lucid. He’s recorded a series of mini concerts from his home. He still remembers every word.

Benedetto: He’s devoted his whole life to the great American songbook. And now, the songbook is saving him.

He rehearses twice a week in his living room.

Benedetto: No cue cards. He sings for about an hour or 75 minutes, sings the whole show, because if somebody calls up and says, “Hey, there’s a theatre. And you can come sing,” he’ll be ready.

Benedetto: It do— I mean, and I am obviously, I’m his wife. I mean, I signed up for better, for worse. If someone has to take care of him, I want it to be me. … There is nothing that gives me really greater joy or greater pride that I’m able to be with him and take care of him. When people say, “What do you do?” I say, “I take care of a national treasure.”