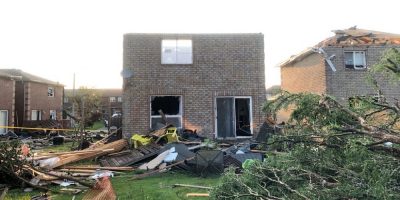 Call her Hurricane Harris, even though it was the fury of a tornado that got Coun. Natalie Harris pushing all the buttons to have hurricane straps added to new homes.

On Monday, Harris proposed the finance department in consultation with the building department report back to general committee concerning a rebate program including resource requirements and a proposed funding source.

Several councillors raised a red flag about the possible cost using a city rebate of $3.00 per strap, or $300,000 per year on average.

Staff based those figures using assumptions for anticipated growth and housing styles, and on a rebate program in Dufferin County. The municipality has partnered with the Institute for Catastrophic Loss Reduction (ICLR) and offers a $4.50 rebate for every hurricane clip that homeowners or building owners choose to install on new construction builds. Dufferin County covers $3.00 with the ICLR paying the remaining $1.50.

Staff indicated funding for such a program would have to come from existing taxpayers.

“I guess the other piece that I’m really concerned about is because this is predominantly going to be affected in the new builds, most of the new builds are not going to be Barrie people moving in,” said Coun. Gary Harvey. “It’s going to be a lot of people from other areas, GTA and things, and it’ll be the current tax base funds that are going to be used to subsidize this program.”

Coun. Robert Thomson had concerns about passing the cost onto the consumer.

“Would it not be prudent for a builder to put it in as a selling feature?” he asked.

The installation of hurricane straps is not mandated by the Ontario Building Code.

Harris said someone from the building department stated that putting hurricane straps on homes would give people a false sense of security.

“That just doesn’t make sense to me,” she said. “That’s like saying we shouldn’t have airbags in our car. I mean, we still wear our seatbelts.”

Coun. Sergio Morales got behind what Harris was proposing.

In the end, general committee asked staff to look for ways to encourage builders to add hurricane straps to new home builds. The information gathered will also include a series of proposed Building Code amendments the city will present to the federal and Ontario governments, likely within the next three months.

Harris has been on a mission to make changes to the Ontario Building Code since the July 15 tornado that ripped through a part of southeast Barrie. She was in a home with her son when the twister ripped off its roof.

She told general committee that local MPPs Andrea Khanjin and Doug Downey will raise the issue of hurricane straps with Steve Clark, the Minister of Municipal Affairs and Housing, in January.

Environment Canada said the tornado that tore through Barrie was a category EF-2 with a maximum wind speed of 210 km/h.

The general committee recommendation also includes a plan to continue to waive fixed water and wastewater billing charges for properties in the affected area until water is being used, and to waive late penalty charges for unpaid 2021 property taxes until Jan. 1, 2022.

City staff has been working with homeowners and the Municipal Property Assessment Corporation (MPAC) to inspect the extent of property damage and reassess property values where warranted. MPAC will be inspecting approximately 70 properties, according to a staff report.

General committee’s recommendations must still be ratified at next Monday’s council meeting.