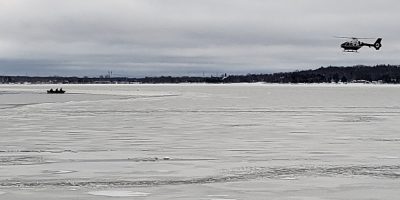 Provincial police say two snowmobile riders that perished in the open water of Sturgeon Bay have been identified as 49-year-old Jereld Bremner and 19-year-old Donald Bremner, both of Coldwater.

The bodies were located on Monday by police divers during a search off Robins Point Road in Victoria Harbour.

Ontario Provincial Police were called around 6 p.m. Sunday by a resident who heard calls for help from the water. First responders including the OPP, County of Simcoe Paramedics, and Tay Township Fire Service rushed to the area and began their search for those in distress.

Police received a report from the Orillia area of two overdue snowmobilers by Sunday evening, and located some clothing at the scene of the search. The rescue effort was paused due to darkness and treacherous waters but resumed Monday morning with the help of an OPP helicopter and search-and-rescue divers.

Shortly after 11 a.m. Monday, divers located the bodies of the two missing sledders. The investigation into the circumstances leading to their deaths continues.

This comes following the death of a man near Midland. Police confirmed on Monday morning that a man died in hospital after being pulled from the waters of Georgian Bay in the area of Midland Point Saturday afternoon.