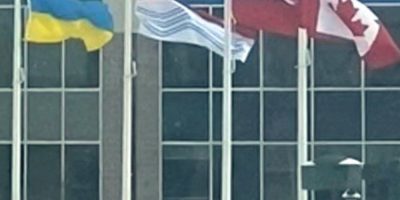 More than 20 years ago, Debbie Webster and her family hosted a 12-year-old girl from Ukraine at their Barrie home as part of the Children of Chernobyl program.

Later, Webster joined the committee to bring another group of kids over, went to Ukraine, and then hosted the children’s interpreter, Olga, who has kept in contact with the Websters all these years.

“Ukrainians are very proud of their country,” Webster tells Barrie 360.

Olga lives in the central part of Ukraine, along with her husband and four pets. Her husband is in the reserve and has been called up to defend the country. Webster says Olga has been in contact with him, but has not seen him since he left.

She says the plight of her friend has made her angry almost to the point of crying.

“It’s been really hard because she is like a member of our family,” Webster says. “And when you have someone that is in such desperate need, and you can’t help them, then it’s frightening.”

While there has been warfare where Olga lives, she has told Webster that she is very frightened for the people who live in Ukraine’s capital, Kyiv.

Webster says Olga has told her she is not fleeing Ukraine.

“At first she was really, really frightened, but now she is angry, and they are taking to arm themselves.”

Olga has told Webster, “we’re going to fight to the end.”

“Ukrainians are amazing people,” says Webster. “They have so much love and so much to give to this world.”

“Oh, I am so grateful to you all,my dearest friends! Thank you my dear Canada, you know how much I love you all! I deeply appreciate what you did for the hundreds of Children of Chornobyl and for me in particular, I remember every moment of the wonderful experience that let me see the world the other way! You totally turned all my consciousnes. Thank you for giving me a lesson that I have been following for my whole life since then. You taught us the most important things: mercy, charity, commitment and deep love and commitment to the state!!! And now at this really tough time for my dear country,you are again can”t stand aside. I have no words to express my apprecciation. And what is really not less important is that my consciousness has become a part of you, your way of life!!! I love you all so much! XXOO”