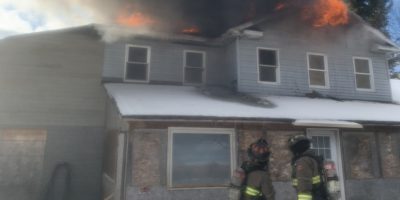 Fire crews in Collingwood have accounted for everybody after a fire destroyed a home on Mountain Road.

First responders were called to Mountain Road near Slalom Gate Road around 1:30 Thursday afternoon, arriving to find the home fully engulfed in a fire that may have started on the second storey. The fire was knocked down, while Collingwood Fire remained on scene through the afternoon to douse hot spots.

The home is said to be a total loss.

Firefighters had been searching for two residents through the early afternoon, worried they were still in the house. Fire Chief Ross Parr confirmed shortly after 4:00 there was no one inside the home.

Collingwood fire department still on scene of house fire on Mountain Road. Confirmed no one inside all accounted for. Thanks to Town of Blue Mountain and Clearview fire for quick response with tankers pic.twitter.com/01rRID9iud

Chief Parr tells Barrie 360 one firefighter was sent to hospital with a burn to his hand.