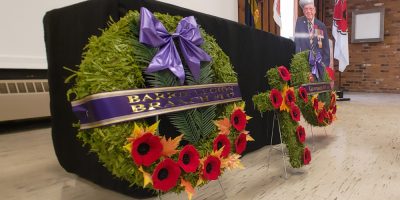 You won’t get an argument from Fern Taillefer about the second year in a row the City of Barrie will mark Remembrance Day with a virtual ceremony.

“With COVID, we are being very, very careful,” said Taillefer, who holds a number of titles at the Royal Canadian Legion including Poppy Chairman. “We have to be careful how many veterans we bring in. Age is a big factor.”

What will be taking place at the legion on November 11 will be a copycat of what happened last year.

“It will be a mini-version of what we normally do downtown,” noted Taillefer.

The invitation-only ceremony will take place at the Royal Canadian Legion.

Wreaths will be preset at the legion before the ceremony begins.

Dignitaries will include the mayor, MPs and MPPs, as well as 90-year-old William Snow, a Second World War veteran from Barrie.

Also in attendance will be this year’s Silver Cross mother Beth McKay and her husband Fred. Their son Pte. Kevin McKay was killed in Afghanistan in 2010 just days from the end of his tour of duty. The McKay’s lived in Oro-Medonte Township at the time of their son’s death. Kevin graduated from Eastview Secondary School in Barrie.

Once the ceremony at the legion has ended, representatives from the city will take the wreaths and place them at the Cenotaph where they will remain for several days.

The city has also honoured Barrie’s fallen soldiers by featuring pictures of local veterans on flags. They are displayed around the waterfront to Tiffin Street and at Meridian Place. There were 13 new flags added this year.

As well on Remembrance Day, veterans can ride Barrie Transit for free with one companion, if they show something that identifies them as a veteran.

The public can watch the ceremony from the Royal Canadian Legion by going to the City of Barrie’s Remembrance Day website.