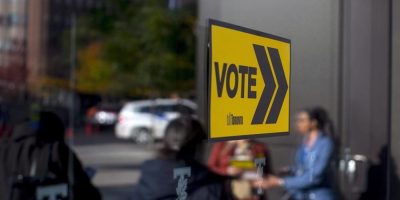 He started a public space advocacy collective in his 20s, founded Toronto’s largest cycling non−profit in his 30s, and led a national electoral reform campaign in his 40s.

Now, in a small community in southwestern Ontario, the 48−year−old Meslin is trying to do something that has largely eluded local governments across the province: get people to vote in a municipal election.

It might be his most daunting task yet. If the past 40 years of municipal elections are any indication, a vast majority of local councils in Ontario could be elected by less than half of eligible voters on Oct. 24.

Political parties spend millions of dollars to promote provincial and federal elections. But in party−less local elections, municipalities themselves are left to fill “part of that vacuum,” said Meslin, who authored a 2019 book about rebuilding what he calls a dysfunctional democratic system.

“I’ve been proposing for 10 years now that municipalities themselves are to blame for low voter turnout, because (of) the way that they promote or don’t promote the nomination period, and (they)also do a terrible job explaining what the election is about and what your options are,” said Meslin.

That’s something Meslin has been working to change in Grey Highlands, Ont., where he has lived part-time for four years and full-time as of this year.

Meslin launched the non−partisan Grey Highlands Municipal League earlier this year with support from a dozen volunteers across the municipality.

They organized election information sessions at cafes and libraries. They mailed out postcards in the style of job ads to recruit council candidates. And when the nomination period closed, they sent out a candidate “menu” to residents, he said.

Meslin says he predicts this self−funded, creative and active outreach campaign can boost voter turnout by 50 per cent in Grey Highlands, where just over one in three people voted in the 2018 municipal election.

And while the real test of the concept comes on election day, he says there are promising signs. Going back to 2003, Grey Highlands had never surpassed 15 candidates for council positions. This year, there are 23.

Voter turnout across the province in the 2018 municipal elections hit a record−low 38 per cent, according to data published by the Association of Municipalities of Ontario dating back to 1982. In those 40 years, province-wide turnout in municipal elections has never surpassed 50 per cent.

More recently, Beebe notes that some key voter turnout bellwethers are headed in the wrong direction.

The provincial election in June recorded its worst−ever turnout, while last year’s federal election saw its lowest turnout in a decade.

“There’s a wide understanding that democracy itself is being challenged, but that hasn’t had a corresponding interest in engaging in an electoral way,” he said.

Beebe expects the fatigue of a third election in 13 months could keep people from the ballot box and calls that the “big wild card” of these municipal elections. Not only are voters tired, he said, but civic outreach groups are stretched thin by the recent elections and pandemic pressures, from staff turnover to reduced volunteer power.

Competitive races, meanwhile, usually foretell high voter turnout, he said. In about a dozen of Ontario’s large municipalities – such as Ottawa, Hamilton and London – candidates are running in open races to replace an outgoing mayor.

But across the province, one−third of all mayors and reeves – many of them in smaller communities – have already been acclaimed after running unopposed, according to the Association of Municipalities of Ontario.

“I take that as a very bad sign,” said Beebe.

In the absence of political parties, candidates drive municipal election participation, Beebe said. When they have to campaign in a ward that’s doubled in size – which is the case for Toronto council hopefuls after the provincial government cut the number of wards in the city from 47 to 25 in the middle of the 2018 campaign – “that becomes completely unfeasible,” he said.

Amber Morley said it’s been an “exhausting” municipal campaign in Etobicoke−Lakeshore, the city’s largest ward with a population over 129,000 people. It’s her second attempt to unseat Mark Grimes, who was first elected in 2003.

Municipal incumbents retain an outsized advantage thanks in part to name recognition, experts say. Studies estimate incumbency increases a candidate’s winning percentage by 30 per cent in municipal races, compared to about 10 per cent in federal races.

When the ward size doubles, it can make it that much harder for candidates to gain a foothold and get would−be voters to the polls.

The incumbency advantage has led groups, including Operation Black Vote Canada, to call for term limits for mayors and councillors.

A three−term limit could make local councils, which are overwhelmingly composed of white men, more representative of the communities they serve, said Velma Morgan, chair of the non−profit, which supports Black candidates and does election outreach.

“Not seeing yourself represented also deters you from participating,” Morgan said.

Meanwhile, the last Toronto council was 84 per cent white in a city with a majority non−white population.In Greater Toronto Area cities such as Mississauga, Brampton and Markham, the disparity is even greater. A 2021 analysis −− authored by Meslin −− found those city councils were more than twice as white than the population.