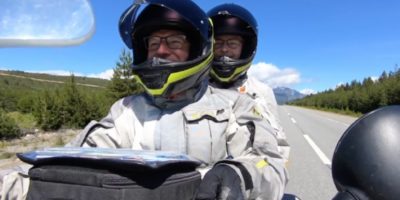 A local realtor has earned some recognition over his good deeds.

Bruce Johnson of RE/MAX in Wasaga Beach was honoured with the 2019 Good Neighbour Award, presented by the National Association of Realtors. The annual award celebrates outstanding leaders of their charitable causes, and their stories. Johnson has very personal experience with his charity of choice, according to a RE/MAX statement:

“Bruce Johnson’s daughter Alyssa never had the chance to feel the wind in her hair while zooming down the open road—a regret he held onto for years. So Johnson, an avid motorcyclist, introduced her to his favorite pastime in his own way on an extraordinary ride he took with his second daughter, Holly, now 18, in 2018—a six-month, 15,800-mile trek from the northernmost point in Canada to the southern tip of South America. Alyssa, who died in 1998 just 20 days after her birth, didn’t physically accompany them on the journey, of course. Johnson carried her in his heart. The memory of Alyssa motivated Johnson to take this trip and similar excursions before it. Alyssa was born with her vital organs outside her body, a condition known as omphalocele. Despite the best efforts of the doctors at SickKids Hospital in Toronto, Alyssa suffered cardiac arrest and passed away in Johnson’s arms.”

Bruce’s personal experience with SickKids Hospital and the efforts of the Children’s Miracle Network led him to his active volunteerism and contributions to the foundation.

“We are so proud of Bruce Johnson and the entire Johnson family for their tireless fundraising efforts raising money for Children’s Miracle Network (CMN) hospitals and the Alyssa Rae Johnson Fund at SickKids,” said Wendy Dempsey, Associate Director of Cause Marketing at SickKids Foundation. “Bruce has traveled more than 60,000 kilometres, mostly with his daughter Holly, across North and South America on his epic Motorcycle for Miracle fundraising journeys. To date, Bruce has raised more than $800,000 that will help improve the lives of thousands of children.”

In winning the award, Johnson also received a $10,000 grant, which was donated to the Children’s Miracle Network.

This year marks the Good Neighbour Award program’s 20th anniversary; in that time, over a million dollars in grants has been awarded to more than 200 nonprofits led by realtors across 15 countries.