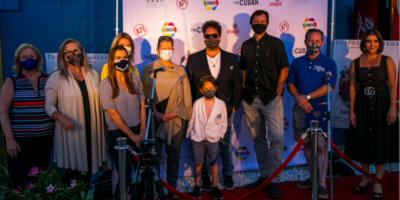 Earlier this week, Barrie Film Festival and A71 partnered up to bring a unique experience to the Sunset Drive-In: A red carpet event complete with Q&A session, musical performance, and a screening of the film.

Barrie Film Festival and A71 partnered up to bring a unique experience to the Sunset Drive-in: A red carpet event complete with Q&A session, musical performance, and a screening of the film.

Barrie 360 got some time to interview a handful of the people who worked on the film, including writer Alessandra Piccione, director Sergio Navarretta, and lead actress Ana Golja.

How has it been promoting a film during a pandemic?

Ana Golja: It’s been a whirlwind (laughs), a continuing whirlwind.

Sergio Navarratta: It’s been surreal, sort of an emotional roller coaster. One minute you think, we’re doomed, we just spent a year filming this movie and it’s never going to come out. Then suddenly it’s going to come out, but how is it going to come out? What are the guidelines? What’s changing? Anyway, together with A71, our distributor, we launched this drive-in tour.

Why was this the story you chose to tell now? What is it about this story that you felt needed to be told?

Alessandra Piccione: Well this was a very personal story I think for everyone who was involved on the team. It started with a young man, who ended up becoming a producer on the project, his dream was to have visited his grandfather back in Russia one more time before he passed away. It was very poignant, I think it really touched us all. So Ana came to Sergio about this idea to create a short film and it really touched him. We all started developing a storyline about exploring the idea of a young person visiting an elderly man with dementia, and we all have experience with dementia in our families, it just kind of snowballed from there. It started as a short film and evolved into a feature but the script incorporates a lot of the stories from the producing team and their experience with dementia.

Any unique challenges while you were filming?

SN: Many. Dealing with actors (Laughs). No, that was the easy part. The unique challenges I think were the logistics; working with an extremely conservative budget and limited resources. Of course shooting in Havana, which would probably take me an hour to describe but ultimately I think that was our biggest challenge but also the most creatively exhilarating and rewarding.

Ana, what was it like working with Louis Gossett Jr.?

AG: Working with Louis was not work. We were very lucky in the way that we met through the development process so we had already established a relationship before we even stepped on set, which is something you don’t typically get when you shoot a film like this. With someone at that level, that calibre of an actor, you really just have to rely on the fact that you did your homework before you got to set and then you step on and he just immediately brought me there. So it really didn’t feel like work, even though it was long days and rather ambitious scheduling, it just felt so effortless and easy.

Alessandra and Sergio, you’ve been working together for quite some time now, what is it about your styles that attract you to one another?

SN: For a director, it’s a luxury to be able to collaborate with a writer, a lot of the time a director will just be handed a finished script. In my case, I was lucky because I was there throughout the whole process and by the time I got to set I knew the script inside, outside, backwards, and all the nuances. There’s a trust there too. When you meet someone new, to forge a creative relationship takes time but when you know someone, you know their strengths and weaknesses and I think it just makes the whole experience more enjoyable and easier.

AP: We get along better when we’re being creative (Laughs). Which is kind of funny because people say how do you work together if you’re also together. But for us, the easiest part of our relationship is when we’re working together creatively.

With other films you’ve done like The Colossal Failure Of The Modern Relationship, You seem to always have comedy sprinkled into your drama. Would you ever create a film without those light-hearted moments?

AP: Well I don’t think life is really like that. There’s always some humour to life. Colossal was certainly more light-hearted than what we normally do but there are dramatic moments to life and there are humorous moments to life. I feel that it’s not truthful if you’re not incorporating some of life’s lighter moments in a way that people normally interact with each other.

SN: One thing I hope people find entertaining about The Cuban is that there are light-hearted moments, certainly in the relationship between Ana and Louis, and that’s what makes the painful parts easier and more palatable. It’s like a piece of music, you need a verse, chorus, bridge, Etc. For the drama to work, you need some levity as well.

Related: The Sunset Drive-In is rolling out the red carpet for The Cuban