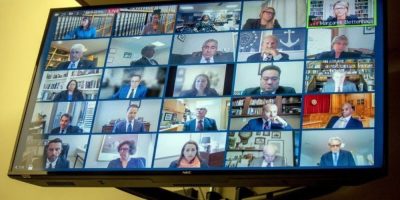 By Jean-Benoit Legault in Montreal

Communication between people is less effective when it’s done through technology as opposed to in person — and remote video chatting may even require a greater level of concentration, a new study by Montreal researchers suggests.

The study’s results, its authors say, could help explain “Zoom fatigue” — the discomfort that many felt during the COVID-19 pandemic after spending entire days participating in online meetings.

“Our findings clearly demonstrate the price we pay for technology,” the authors say in the study, called “Technologically-assisted communication attenuates inter-brain synchrony,” published in the December 2022 issue of the open-access journal NeuroImage.

Guillaume Dumas, a researcher with Université de Montréal and the Sainte-Justine children’s hospital, along with colleagues, used an electroencephalogram — a test that measures electrical activity in the brain — to examine the brains of mothers and their children. Sixty-two mother-child pairs were studied; their brain activity was measured when they were talking in person and through a remote video chat.

The researchers found that participants’ brains “synchronized” when they were in each other’s presence but did not do so when they were chatting through a screen. Researchers said they were able to observe nine important “cross-brain links” between participants during an in-person conversation, compared to only one link during the virtual chat.

They said they think the links formed during in-person discussion permit people to communicate emotions or offer non-verbal cues.

“It’s the adage about being on the same wavelength,” Dumas said, adding that it’s clear from the study that certain cross-brain links are absent when people talk through video conferencing software.

“We pay a bit of a price by using technology to communicate by having lower-quality and less authentic communication, compared to what our brain is used to (and) what it was made for.”

The human brain is the result of tens of thousands of years of evolution, while technology is rapidly evolving, he said. The brain, he added, is configured to manage interactions and communications with others face-to-face.

Researchers found that during in-person discussions, the frontal regions of the mother’s brain linked to each of the regions measured in the child’s brain. The frontal cortex is associated with high social functions, including social cognition and decision-making in a social context.

In-person communication, Dumas said, makes it easier to convey and identify non-verbal cues, to anticipate what the other person might say and to recognize innuendo — subtleties that are more difficult to identify when speaking over a screen.

The study, he added, raises concerns about youth — who heavily use technology to communicate.

There are neuroscience experiments that show there are critical periods for youth to learn certain social norms that can be harder to pick up later in the developmental process, he said. The use of technology also opens the door to certain habits that were more difficult to do in person, like cyberbullying.

“People who would not have acted out (in person) have much less difficulty in exhibiting toxic behaviour on the internet,” Dumas said.

“Zoom fatigue,” he said, can be caused by delayed social feedback, difficulty sustaining attention, by people not showing their faces, by posture issues, or by responses that are slow in coming due to muted microphones. Reduced brain synchronization, Dumas said, can be added to that list.

“We may end up concluding that a 15-minute in-person meeting is more effective than an hour-long online meeting.”