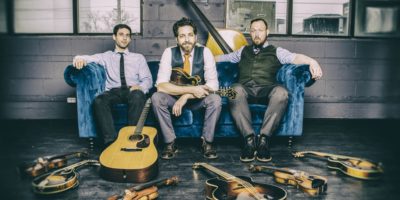 The Andrew Collins Trio marks their first performance in Innisfil for a CD release show April 6. The show, which is presented by Music Up Close, is in honour of their third record.

The new album, called Tongue & Groove, is actually a double release – one with instrumental tracks, the other songs with lyrics. It was nominated for a 2018 Canadian Folk Music Award.

“I had a big list of covers I wanted to adapt for this group and the original plan was to do a vocal CD but we’re known for instrumental so we released it too,”

Collins has performed in Simcoe County in the past with The Foggy Hogtown Boys. Some may also know the 5x JUNO nominee/7x CFMA winning musician from the Creaking Tree String Quartet.

They came together in support of one of Collins’ solo album called Cats and Dogs around 2011. Since then, the group has become his full-time project.

Based out of Toronto, the trio has released mostly instrumental albums in the past even though singing is a big part of their live show. The new album is a fusion of a lot of different styles of music ranging from folk to newgrass, Celtic, country,  jazz, and chamber-oriented roots.

The title Tongue & Groove is a tongue-in-cheek play on words, one of Collins’ favourite things to do. It references basic carpentry, ‘hitting the nail on the head’, milling each cut to perfection.

“One thing that drives me is crafting a show – it’s not just about playing – it’s trying to make a show entertaining, surprising, humorous,”