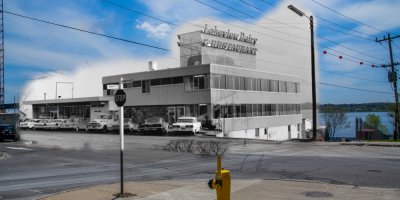 The original Lakeview Dairy was purchased in 1947 by the first Mayor of Barrie, Willard Kinzie. When he purchased it, the dairy only had about 800 customers, but by 1951, over 8000 people frequented its many stores. It even had a comedy club that hosted Jim Carrey before he became a huge star! Lakeview Dairy was sold in 1971 but not before having over 250 employees, being the number one stop on the way up to cottage country, and becoming a fixture of Barrie life before its demolition in 1989. The lot that used to be Lakeview Dairy is currently being developed into a condo complex.

If you want to learn more about Lakeview Dairy and all of Barrie’s history, head over to the Barrie Historical Archives, Barrie’s online museum. It’s full of pictures, videos, audio, and documents spanning nearly 200 years and it’s completely free!

Be sure to check back soon for more in our Barrie Then and Now series and we will also be updating this interactive map so you can explore Barrie’s history yourself!

Featured Image courtesy of the Barrie Historical Archives via barriearchive.ca