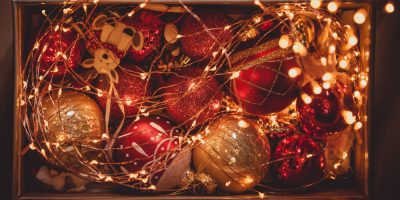 There aren’t many holidays where you show off your seasonal pride with so much panache. But, who started the tradition of Christmas lights?

The first adoption of any sort of Christmas lights was actually in 18th century Germany, where Christmas trees were occasionally decorated with candles (seems like a fire hazard, but you do you, Germany). Eventually, candles began to be replaced by small lanterns and glass balls that held candles.

Fast forward to the 19th century and an associate of none other than Thomas Edison would have Christmas tree light bulbs made especially for him. The man, Edward H. Johnson, would proudly display his new Christmas Tree, which he hand-wired with 80 red, white, and blue lights about the size of walnuts, at his home in New York City.

Local New York newspapers at the time didn’t pay the publicity stunt much mind, but a Detroit paper did run the story which gained a lot of traction, earning Johnson the prestigious title: “Father of Electric Christmas Tree Lights.

While Christmas lights were still too expensive for the average person, businesses began stringing up Christmas lights in their store displays by the start of the 20th century. By 1930, prices had become affordable enough that electric Christmas lights became the norm, replacing candles.

Even though Christmas Trees were starting to light up with a far less flammable alternative, house decoration was still a few decades away. A few bulbs on your tree is one thing, but coating your house in lights was still an expensive dream to most.

However, by the mid-1950s outdoor lights were becoming more and more common in places all over the world, from Rockefeller Centre in New York to suburban neighbourhoods in Toronto.

Nowadays, outdoor light displays usually outnumber those without, and we wouldn’t have it any other way!