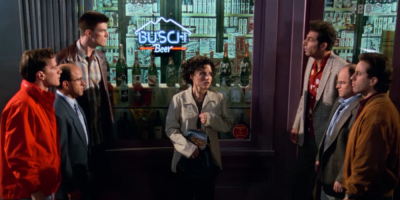 One of the greatest and most influential shows ever made, Seinfeld, is finally coming to Netflix on October 1.

It’s hard for a week to go by without somebody spouting an iconic line from Seinfeld. Did your favourite restaurant forget something you ordered? “No soup for you!”. Girlfriend wants you to wear a certain shirt to that party? “But I don’t want to be a pirate!”. Also, I don’t think I’ve ever given anyone a bill without slamming it down on the table and yelling “I’m out!”.

When the first episode premiered in 1989, 17 million people took their first few steps into Jerry’s apartment and Tom’s Restaurant. As time went on, Seinfeld would average around 30 million viewers every single week and was the undisputed king of Thursday nights. By the time it was over in 1998, the finale drew in a massive 76 million viewers to say goodbye to its beloved (though, not by the strangers on the show, it would seem) characters.

For the first time ever, Netflix has acquired the rights to Seinfeld and starting on October 1, you’ll be able to stream all 180 episodes. The show used to be exclusive to HBO.

Whether it’s your favourite show or you somehow haven’t seen it yet, it’s time to jump back in. Seinfeld really is a show for just about everyone (as long as you’re not a man who uses the gentle cycle).