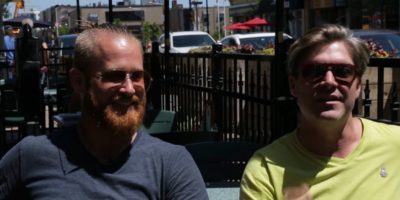 Celebrity Chef Randy Feltis and his good buddy and fellow Restaurateur Ryan Traversy are a couple of characters, to say the least. “Shake and bake, now you see me, now you don’t.” That’s how the two signed off the last time we shot a video with them. It’s who they are. Fun, confident, creative, knowledgeable and savvy.

The pair began Barrie’s largest food festival in 2008. “Every year we think we are going to be prepared for the start of the festival and we never are,” jokes Feltis. The two acknowledge the restaurant business is always last minute. “That’s the beauty of it,” says Traversy. “Barrielicious people love it though, so it organically works itself out.”

Feltis and Traversy jumped on what Toronto was doing at the time with a summer and winter festival. The pair say it was a tough go at first but now restaurants approach them. “They actually come to us now, where before we had to beg, borrow and steal to get them onboard,” says Feltis.

They have added Top Cheflicious and 6 Dishes to their menu as well. Top Cheflicious is Barrie biggest food event that draws huge crowds every year. The City’s best chefs battle for the crown of Top Chef Barrie. The 6dishes event is more intimate and exclusive, featuring a night like none other with Randy and Ryan. They serve food you’ve likely never tried in a way you most certainly never experienced. Watch both below.

“The cool thing about Barrielicious is that these are real local chefs cooking seasonal fresh dishes, this isn’t stuff coming out of a box, into a microwave and onto your plate, these chefs put a lot pride into each dish, says Traversy.

Feltis says there are some mom and pop shops where it’s actually the mom’s recipe and they’re making the meatballs from scratch. “Barricilicios is about getting away from generic big box places and go out and taste real flavours. These are local, independent, real chefs.”