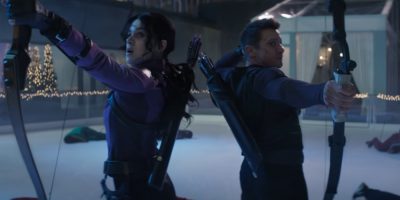 Marvel has just dropped the first trailer for its upcoming miniseries, Hawkeye, and it’s looking to be a lot of fun.

Reprising his role as Clint Barton, a.k.a. Hawkeye, Jeremy Renner will star alongside Hailee Steinfeld, who is playing a new addition named Kate Bishop (possibly taking over the Hawkeye mantle?). The miniseries will follow Barton as his past begins to catch up with him. If you recall, he spent some years during the snap punishing criminals in a less than heroic manner.

The film has heavy holiday vibes, going as far as using It’s The Most Wonderful Time of the Year in the trailer, and the plot centres around Barton trying to make it home in time for Christmas.

There has been a lot of buzz around the Marvel Extended Universe lately, with directors dropping from projects and, of course, Scarlet Johanson’s very public lawsuit against Disney. Hopefully, the MCU can continue to grow and give us more amazing content. Fingers crossed, Hawkeye is a step in the right direction.

Hawkeye might be the final Disney Plus release for the MCU in 2021, wrapping up a pretty solid year of content including, WandaVision, The Falcon and The Winter Soldier, Loki, and What If…?. There is still a possibility that we’ll see Ms. Marvel before the year is out, but there is no confirmed release date for that yet.

Hawkeye will include 6 episodes, released weekly on Disney Plus, starting on November 24.