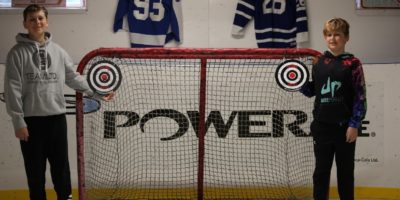 Two Innisfil brothers are getting a lesson in business while helping improve their game.

The idea came last year when the boys where fixing yet another foam target that came apart. Owen suggested they should be made out of metal.

They approached their father Patrick with the idea who said, “I think you’re onto something here!”

From there Patrick called a friend who had a metal shop, and after some design work and planning, the Boomer target was created.

The targets got a good workout in the indoor hockey rink Patrick built in the basement. They are extremely durable except for the occasional scuff marks.

They aren’t limited to hockey. They can be used for lacrosse, baseball, ball hockey, football, and soccer, as well.

Feedback has been great so far. Simon and Owen play for the Innisfil Winterhawks and say friends on their hockey team are reporting better accuracy with their shots. Hitting the targets is addictive, as you get that satisfying “ping” noise when you hit it Simon says. “They want to hit them again and again!”

The highlight of the project is that it’s a family venture with everybody involved. Adriana, the boys’ mom, says if the lights are on in the garage at night it means we’re in there making targets, “It’s not your typical garage with cars and toys, it’s more of a little workshop.”

Owen is quick to sing his dad’s praises on the project moving forward. “Some parents would just say ‘oh yeah, that’s a good idea’ and then not do anything with it, but my dad followed through.”

The whole family has learned new skills in the last year by embarking on the business. Patrick says, “no matter what happens we wanted to utilize this as business experience to teach the boys.” The parents are learning new skills too. “The boys have taught us about utilizing social media,” says Patrick.

Yeah, says Simon, “whenever my dad’s posting something he always asks me how to do it!”

The targets can be ordered at boomerhockey.ca